Are You Ready to Go?

Exploring the best of quality modern indie and rock music 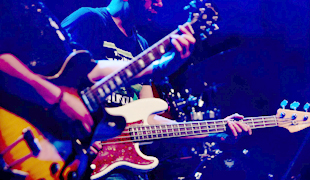 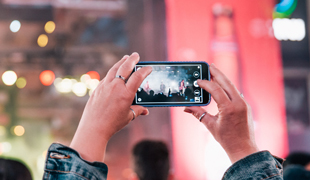 Hi everyone, we have the team back round the virtual table for a new set of bast indie recommendations.  Here it is:

We also have a great classic song.

Let’s start with you  RP.

The coldness of the night

RP: There are some artists that you hear for the first time, and thirty seconds in to their first song you just know they are something special, and that you will probably be listening to them for the rest of your life. This happened to me with the New Pornographers, with Trevor Sensor and with Jenny Lewis, and it has happened again with the Ruen Brothers and their song 'All My Shades of Blue'. With influences going back to the earliest day of rock'n'roll and sounding like a modern Roy Orbison or Gene Pitney with extra power, these English brothers have wonderful songwriting and musical ability and are sure to be huge. Everything they’ve recorded is worth listening to. We'll have to do a special for them.

QD: Yes, a quality act there!

MB: She's recently broken through as a rank 6 artist on Spotify (over 100,000 listens a month), and this is very well deserved. Sara Jaffe's song ‘Clementine’ is a good example of how unusual and powerful her music is, with a hypnotic sort of quality to her voice and a very well arranged string backing.

ED: PJ, what treat do you have for us?

Are you ready to go?

PJ: Well, I have a band with a different style but just as strong a female voice. The Popguns have been going for decades and have never really become a big or well-known act but have released some great stuff over the years. Talking of specials, we should do one on them. Their latest single is 'Carrying the Fire' and has their characteristic crashing chords, thumping bass and the magic voice of Wendy Morgan. You don’t get more indie than this, and great music to drive to.

The urge to have, the need to know

QD: A total change of pace here, with a moody and hypnotic but really engaging song supported by memorable violin work. The Murder of Crows is two person band consisting of a male guitarist, Alan Sparhawk, and a female violinist, Gaelynn Lea. I just like the song 'Let it Go' for its deliberate pacing, the clever sound layering and the fact you want to sing along with the male/female chorus. By the way, a murder of crows is another way of saying a flock of crows, the same way you would say an exultation of larks or a charm of goldfinches. They get less than 1000 listens a month, let's change that.

When I was a lad

MB: Barely a level 9 band, this trio of Michigan musicians called Breathe Owl Breathe creates atmospheric and innovative music, and deserves to be much better known. This song 'Playing Dead' is a good example of their work: setting a mood thorough the gentle acoustic guitar and slow, unhurried pacing. Listen out for the cello and the harmonised lead vocals as the song carefully picks its way through the melodies.

Ed: PJ, do you have another favourite?

PJ: (Naughty words included in song.) Longstanding Canadian musician Jason Collett - he started playing in the 1980s- has really come into his own with his latest album, and this song ‘Hangover Days’ is a good example of his latest collection’s lyrical interest and musical power. Somehow reminds me of Graham Parker.

I will move heaven and earth for you

MB: With monthly listens on Spotify only in the 100s, and active since 2011, the New York band Pale Lights needs some love. Listening through their two albums you get the sense they are on the edge of writing a really great song. I’ve chosen ‘I will not pray’ because it’s the most melodic and punchy song of their collection, though ‘Another Broken Heart’ comes close. If you like guitar based indie pop music, check them out.

Ed: how about a classic to end with again? Something great but which the modern generation needs to be introduced to?

By this beat, by this verse

RP: The English band called James is famous for their songs ‘Laid’ and ‘Sit Down’, but they also have a wonderful back catalog which really pays exploring if you don’t know their work. The song ‘We’re going to miss you’ is from their 1999 album Millionaires, and is brilliant, melodic and unsettling, with a really memorable chorus and brilliant production form Brian Eno, whose voice I think can be heard singing along. The band is still going strong, too.

Ed: What a memory, thanks! 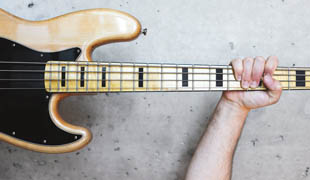 The Popgun's home page with tour news and a discography.

The Murder of Crows 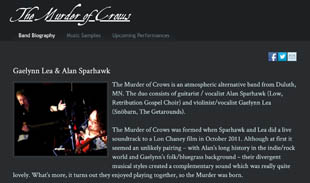 A biography, music samples and upcoming performances for the 'atmospheric alternative' band. 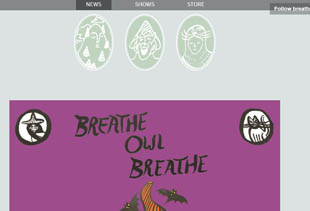 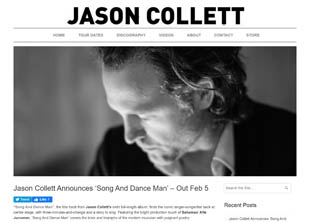 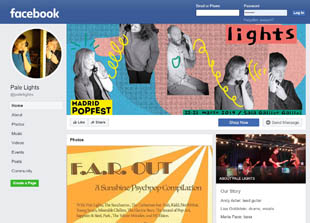 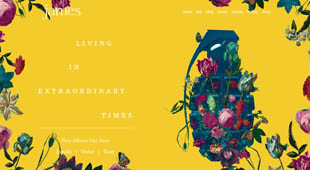 Attractive web site for James, with music, news, a complete history of the band (in 7 parts!) and a blog.